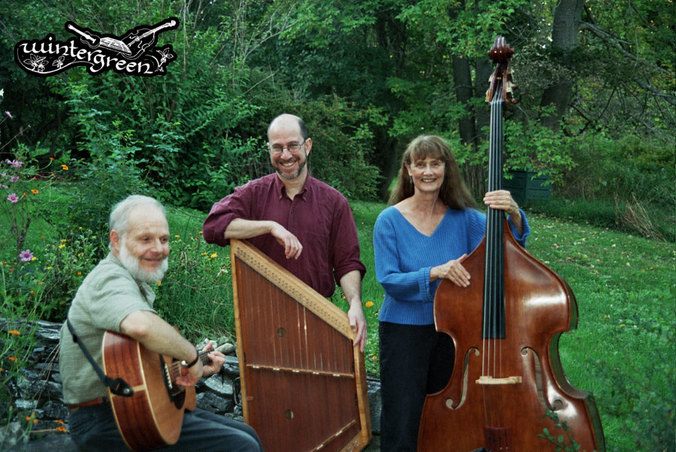 ​WINTERGREEN performs a mixture of traditional and contemporary music from the British Isles and America, along with their own compositions. Their programs feature instrumentals based on dance tunes, intricate three-part vocal harmonies, and a wide variety of folk instruments. Among other places, this trio has appeared at the Troy Music Hall, WNYT-TV Albany (NBC), Caffe Lena in Saratoga Springs, NY, the Clark Art Institute in Williamstown, MA, and has performed several concerts in Germany. The group has recorded four CDs, “Pass It On Down”, “Potluck”, “Old Songs and New”, and “A Song of Home”.
​Alice and Larry Spatz perform throughout the Northeast, appearing on television, radio, at folk festivals, in concert and at clubs, schools and colleges. Active folk musicians since the 1960s, they have performed internationally and recorded several albums and tapes as soloists and with other performers. They may play as many as eight instruments during a performance, including double bass, autoharp, psaltery, guitar, mountain dulcimer, recorder, banjo, and percussion. Their appeal is wide, from audiences of preschoolers to senior citizens. As members of the folk trio October Mountain, along with Anson Olds, they appeared monthly on a live radio show broadcast on WAMC, “The Northeast Folk Festival.” Alice has recorded as a vocalist and bassist with Cindy Mangsen and Bernice Lewis.
Jared Polens plays hammer dulcimer solo and with others throughout the Northeast. He was a member of the contradance band, Southwind, and also sings with the a capella vocal quartet Northern Spy which has opened for Maura O’Connell and Tom Paxton. Jared has recorded as a vocalist with Alouette Iselin of Nelson, NH and with Ed Kohn of Windsor, MA. For several years he organized weekly music nights on the summit of Mount Greylock and he has frequently performed at the Acoustic Brew in Williamstown, MA.